During the quarantine, we found ourselves experiencing new, old or renewed habits under a new light. Certain activities suddenly stood out by being capable of sustaining us and giving us comfort in days of confusion, hyper connectivity and secluded loneliness. Some cleaned the closet and started growing plants, some deepened our relationship with embroidering as a means to inhabit a suspended notion of time. The monotonous gestures of fingers and hands could be easily mirrored by a mind softly in motion, active but in a trance like state, away from concerns and distractions.

If some of us feel that we don’t want to go back to normality, because as it had been said lately, normality was the problem, manual labor reminds us a passing of time in the antipodes of the imposed dynamics of production and consumption. Likewise, stop motion functions according to the logic of adding small actions that can seem endless until a result is revealed. Almost magically, the humble act of repetition allows the appearance of a new creature or world. And then we can start again.

According to Petros Lolis: “threads start weaving together, when we touch and electricity blows us away for a second it is as if we hit the restart button. We both get up and start dancing in the middle of what could be called a room. This is not some romantic love story, it is a relationship of molecules recreating nonlife.”

A while ago, Eliana Otta began embroidering a poem by Peruvian author José María Arguedas, to try to learn it by heart, with the help of her hands. She chose to do it on pillow cases, dedicating them to reinvigorated dreams to come. In the process the task seemed infinite. Until the quarantine allowed her to complete it.

For Stavroula Papadaki, sewing is like drawing or painting with a needle. Figures and faces usually appear spontaneously. Her technique is not the orthodox technique of embroidery and she considers it surrealistic.

Angel Torticollis is an artist who has just started embroidery. With a past in fashion and textiles, he also does drag as Kangela Tromokratisch. All his work is self-referential, it starts and ends with him/her.

When Gregoria Vryttia works, her mind goes through two processes. On the first stage she is very concentrated, trying to make important decisions about how the piece will look. On the second one, the hands can function without the engagement of the brain, and thoughts pass by like clouds. She enjoys embroidering on old clothes or handiwork, paying homage to the previous woman who worked on them. 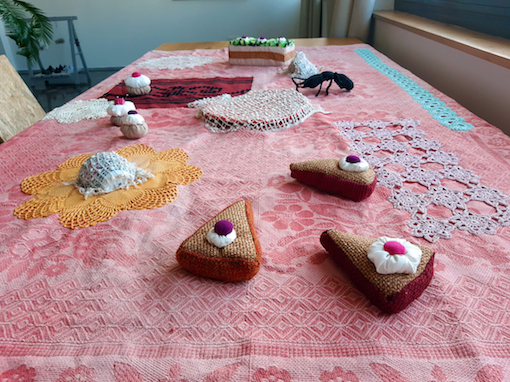