Bolero: Art on a Newspaper

Bolero: Art on a Newspaper

The international exhibition Bolero: Art on a Newspaper is coming to Athens during Documenta 14. Initiated by Belgian artists Frank JMA Castelyns, Willo Gonnissen, Mulugeta Tafesse and Pierre Mertens Bolero is a nomad exhibition presenting works inspired by and made on newspapers. The project investigates and challenges the meaning of news in a globalized world and explores the possibilities of artistic independence.

Bolero grows and expands similarly to a caravan that is constantly getting bigger during a trip in the desert. The works of art that are put up on walls in various public spaces in each country where the exhibition takes place, gradually fade and disappear similarly to the memory of a passing caravan. What remains, are the suitcases in which the works travel from country to country, the prints and the postal invitations.

The Belgian Newspaper De Standaard of 19/2/2010 was the starting point of the project. Visual artists Frank JMA Castelyns, Willo Gonnissen, Pierre Mertens and Mulugeta Tafesse used a page from the newspaper and transformed it into an artwork. Digitalized and printed, their piece traveled to Addis Abeba (Ethiopië). Local artists were then invited to do the same with a local newspaper and contribute in this way to the first exhibition of Bolero. The front page of De Standaard appeared on the invitation card. From Addis Abeba to Dar Es Salaam (Tanzania) and through Prince Albert (South Africa), Ho Chi Min City (Vietnam), Bangalore (India), Dortmund (Germany) and Beijing (China) Genk (Belgium) Ankara (Turkey), Mindelo (Cape Verdian Islands) and Genève (Switzerland) to Athens (Greece). An image from a previously used newspaper is the invitation for every new exhibition stop.

Bolero – Station: Athens
Greece is a country with a huge number of daily newspapers -more than 20- where politics are traditionally part of everyday life. It is also a country that for the past seven years has had to face disturbing news and devastating facts. The newspapers that have themselves survived the crisis so far, present no news of a viable "way-out".

The works will be presented in Eos Gallery in Vicoria Square, Athens, alongside 57 prints that were produced during the previous editions of the project. During the course of the exhibition several of the characteristic Greek kiosks in the centre of the city currently not in use -also as a result of the economic crisis- will be reanimated through artists' interventions. 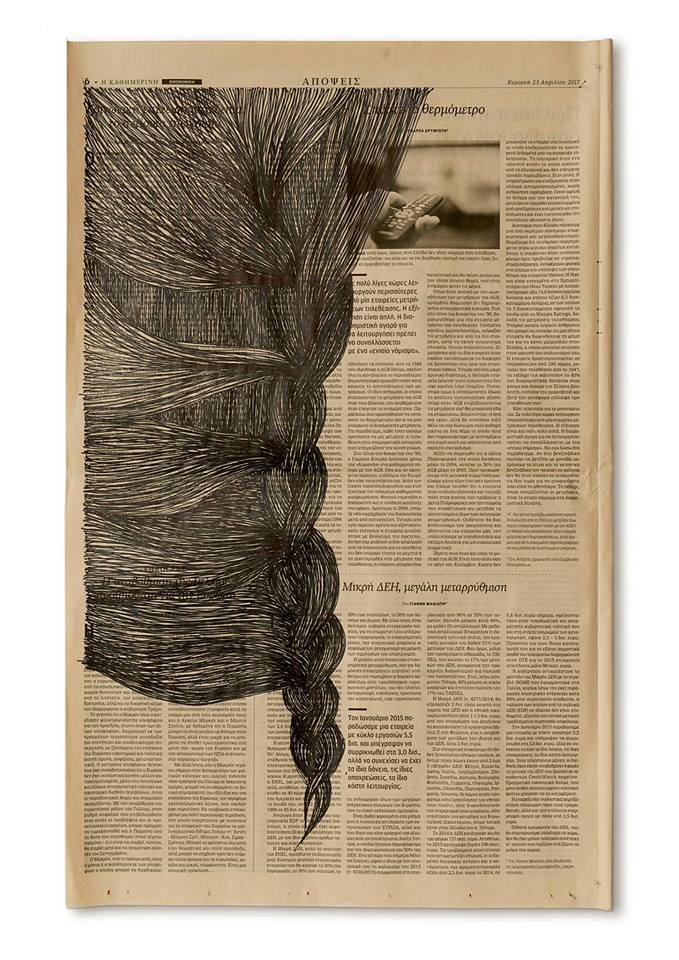