Guided tour of the exhibition by the curator Marina Fokidis

The guided tour marks the closing of the successful exhibition at Goethe-Institut Athen, that opened to the public on May 3, 2022, in the framework of the New Old Properties symposium.

Exhibition ANDREAS SIEKMANN: PAWNS, TRUSTEES, AND THE INVISIBLE HAND
Pages towards a history of the Treuhandanstalt

Exhibition opening in the presence of the artist
In his much-admired work Faustpfand, Treuhand und die unsichtbare Hand (Pawns, Trustees and the Invisible Hand), Berlin-based artist Andreas Siekmann focuses on the market mechanisms and political processes that underpinned East Germany’s economic restructuring after German reunification. The work offers an unusual new angle on the debate about public ownership. Drawing on the aesthetics of 1920s political constructivism, Siekmann’s series of twenty prints describe the process by which the GDR’s Publicly Owned Enterprises (VEB) were transformed into privately owned companies in reunified Germany. The so-called Treuhandanstalt, or trust agency, was set up to coordinate this massive process of privatisation – a total of 13,500 East German enterprises were privatised or liquidated within the space of three and a half years. The transformation of the VEBs into limited companies was essentially seen as a form of pledge – a pawn – a condition that would allow the invisible hand of the market economy to perform a new economic miracle. Adapted for the Goethe-Institut Athen and rendered into Greek, Siekmann’s acclaimed work from 2005 uses artistic means to reveal political decision-making processes and economic power structures, while exposing the real questions at stake. Not only does the work examine a key element of recent German history, it also opens up the discussion surrounding public ownership, looking at it from a perspective that resonates strongly in today’s Greece as well.
Curator: Marina Fokidis
Exhibition Design: Eleni Spyridaki

The event is part of the New Old Properties Symposium. 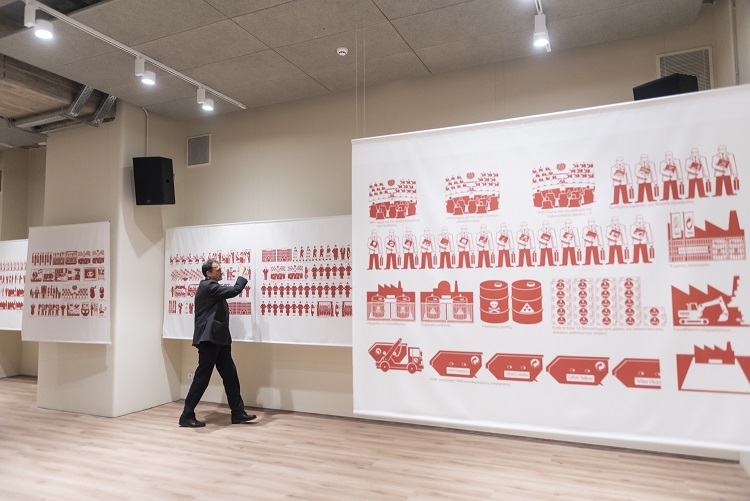