In his latest series of paintings, Samios welcomes us to the traditional kafeneio (café) with its marble-topped tables and mirrors. This is the painter returning to a carefree time, as well as a time of personal distinction, when, in the early 1980s, he introduced himself to the metropolis of Paris through a series of cafés. Much was changed since then, of course. In the new reality, with relationships being tested to breaking point, a new type of social behaviour has emerged. Public interactions must, for a long and yet undefined time ahead, comply to certain rules of coexistence. And if the human presence has been replaced, in part, by its digital counterpart, the human need has never stopped looking for the body, the aura, the gestures, the gaze, without the mediation of a screen. Because, what is the thing that always reassures us when everything around us feels threatening? People. And, most of all, our own people. The concept of “our own” contains, in itself, a safe haven, a sea that you slip and dive into, float on your back, with the sun on your face, threatened by nothing.

In “Skoufa” Gallery, Samios sets up a place of familiarity, like those he came to know in the Athenian and Parisian cafés. “The café was a temple”, he tells me, and in the context of a “refuge”, he attempts to recapture in painting a “paradise”, not irrevocably lost. The theme of the kafeneio/café draws its inspiration from a place that no longer exists. In Attiki Square, near the painter’s studio, roughly ten years ago, there was a café called “O Paradeisos” (Paradise). “It was the local hangout of a neighbourhood that drew a very mixed crowd; labourers, old men, pimps. A crowd that, from the outside, shared nothing in common, but we all “communed” there together. The old man who ran it died, and there is now a pharmacy in its place,” the creator says, recognising that the familiar space of the kafeneio, the hangout, was strangely healing for its patrons. In that “cathartic space” people connected through everyday things. From football chat to “serious” political issues, often intermingled, you could hear, between the rolls of the dice or during an “eternal” game of cards, suppressed desires, neurotic dreams, confessions of the day, the night, a whole lifetime. Even the sharing of silence had its meaning”.

The Greek café “O Paradeisos” encompassed all of the beauty of the post-neoclassical tradition, all the joy and the misery of the whole of Greece. Moments of sensuality, of joy, a light that shone from the faces of the people themselves; and in the afternoons, the old boys who drank their coffee without talking, just passing through. I have gained so much from cafés, and I wanted to ensure their perpetuity,” Samios confesses. That is why his works today are able to function as icons, as shrines not to a single era, but to a way of life.

For the painter, however, the café was much more than just a favourite scene. It was a space of intellectual freedom, a hive that shaped him in terms experience as much as painting. Although he is quick to point out that he isn’t a café lounger, the type of man who daydreams over his cup of coffee, he belongs to a generation that was raised in the café culture. “The cafés of old, Zonar’s, Loumidis, Brazilian, or Magemenos Avlos, were schools. We would go in our youth, and stay until dawn to see Minotis, Manos [Hatzidakis], Eirini Papa, Antoniou, all those folks who are now acclaimed musicians. It was an intellectual space, before Manos started the Third Programme”.

The painters recalls his teachers with gratitude: Yiannis Moralis, Nikos Nikolaou, and Panos Sarafianos, who prepared him for entry to the Athens School of Fine Art. To Hatzidakis, however, he owes the opening up of his horizon. “It was Giorgos Stathopoulos who first took me to Manos. Hatzidakis, I remember, used to go to Ikaros, read Plato, and in the evenings, under that influence, he would talk to us about his ideas. When I left for Mount Athos, where I spend six months (in order to create the paintings for the 1978 calendar of Heracles General Cement), I read only Plato, and the reason was Manos”.

In addition to this unusual but meaningful “apprenticeship” with Hatzidakis, Samios is an artist who has suffused his gaze in the work of Tsarouchis. And the philosophy of both, Hatzidakis and Tsarouchis, has been decisive in the painter’s development. “Palette, a café dating back to 1870, was Yiannis’ kafeneio (and he reveals the dietary transgressions of the diabetic Tsarouchis: “You’d bring him a box of biscuits, he would open it and eat the lot, like a cat”). The Paris gang consisted of Fasianos, on occasion Giannis Kottis, Giorgos Golfinos and, of course, Dimitris Kraniotis. “When I first went to Paris (1978) and started spending time in the cafés, I was so strongly affected that I made a large series of paintings”. “The French Cafés” were shown at the Samy Kinge gallery in 1982, but that entire body of work was lost in a devastating fire at his studio (1985), dramatically changing the way Samios painted. “Now, I am going back to my first loves, with the full sense of the café,” he confesses.

“Samios brings a quintessential Eastern style into a quintessential Western theme,” Thanasis Moutsopoulos writes about the painter’s cafés. Of course, Samios has seen Tsarouchis’ famous paintings of “Neon” in Omonoia (1956-1966) and when he goes to Paris, he lives them first hand. Like Tsarouchis, he takes tradition into account, an arsenal that he studied closely before leaving for France. (“I had the good fortune of spending precious hours with Pavlos Mylonas, on the scaffolding of Protato [on Mount Athos]. When you see the paintings of Panselinos, you see Pompeii”, he had told me during one of our previous meetings). The lived cafés of Paris, therefore, are viewed in the way of Tsarouchis, in the Byzantine way in which that important “teacher” painted even the “classical” works that call up the masters of the Renaissance.

The exhibition is divided into two distinct units: one on Parisian cafés, and the other on Greek kafeneia. Both afford the painter the opportunity to change the atmosphere, at times even the intensity of colour, without ever straying outside the margins of his subject. The “French” cafés are littered with heels and handbags – a trademark and personal “fetish” in the painting of Samios –, who, without any consideration for their actual size, places enlarged versions next to the chairs. There are suitcases there, too, while the night-time lighting submits the viewers to a state that invokes the American creators who spent time in Paris. In the Greek kafeneia, conversely, there is usually an open window glimpsing out to sea. Samios is part of the line-up of painters who captured the magic of kafeneia (Spyros Vasileiou, Yiannis Moralis, Michalis Manousakis), by introducing the element of water. It’s not that he’s painting the sea, but that he can’t not paint it and make space for it in his inspiration. The sea, through the filter of his gaze, functions as the essential breath of air in the main theme of his work.

At a time when covering our faces means protection and preservation of life, the need for figurativeness, for showing those things we once knew as everyday life, is becoming an imperative. This is no longer a “political” stance, as some Greek neo-figurative painters claim in order to declare its value, nor does it resemble a “game of the imagination” anymore, as Samios once wrote. It is the transformation of nothing into something we urgently need, like a vaccine. Because art can bring you close to pain, to its intensity, to its ability to inundate you, but it also gives you the means to exorcise it. 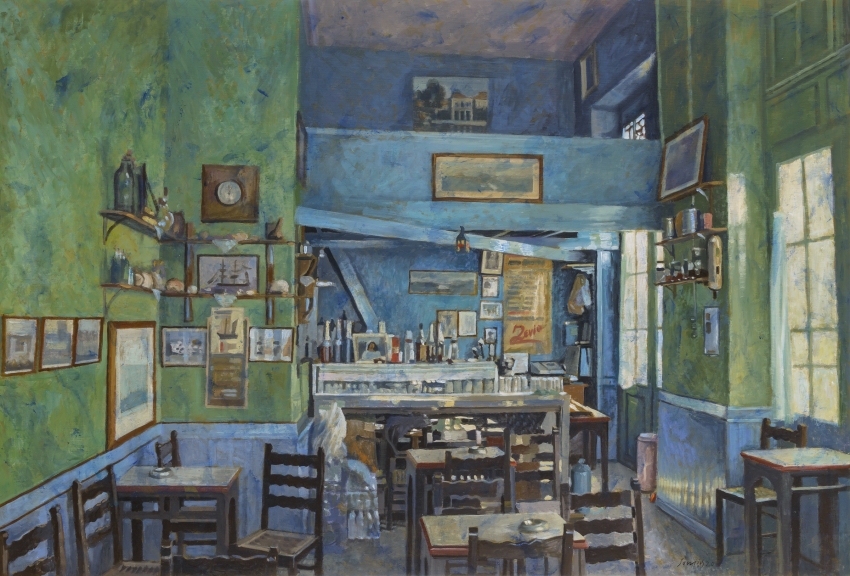