Multidisciplinary artist and designer Omer Arbel will present a series of new sculptural works at Carwan Gallery in Athens. From 3 September until 7 November 2020, the exhibition 113 will showcase a display of copper sculptures that are the result of a strand of new discoveries that are part of Arbel’s ongoing research into the reciprocal relationship between glass and copper.
In the creation of 113, a glass form is blown conventionally, then a liquid alloy made predominantly of copper is poured in. The chemical composition of both glass and alloy are calibrated to establish a deliberate discrepancy in the rate at which each material expands and contracts in response to temperature change. As a result, during cooling, the glass form shatters off, leaving a metallic shadow of itself. The metal, when hot, does not come in contact with oxygen on the glass side of the form, leaving an iridescent finish, contrasting with a coarse oxidized finish on the inside surface exposed to oxygen.
The exhibition consists of 70 unique pieces which have been created by hand in Vancouver, Canada. They will be shown as a fixed constellation positioned on a display table along the central axis of the new Carwan Gallery space in Athens. The gallery promotes and produces collectible design, developing exceptional cross-cultural collaborations that call to attention a specific market – the Near East. For those unable to visit the gallery, an innovative VR experience and guided journey has been created for the exhibition.
These works demonstrate Arbel’s decade old signature process, which is to let the intrinsic properties of a given material suggest its form, rather than impose an external idea of form upon the material.
“For some years I have been interested in matching the coefficients of expansion of glass and copper, so that the two could be fused on a molecular level and manipulated. I’ve wanted to explore formal languages that might emerge when two materials, so different from each other, marry. Over time, I’ve realized that a good idea eventually leads to its opposite. Here, for 113, the coefficients of expansion are deliberately divergent. When hot, the glass and copper interact to make a form that neither would be capable of on its own, in a kind of performance staged by the glass blowers, with great skill, in a short amount of time. The object immediately begins to cool, and the two materials, because of their intrinsic nature, are completed to reject each other, break off and separate. I am interested in the form that remains, an artifact resulting from (or documenting) a performative act of unpredictable contingencies and circumstances.” 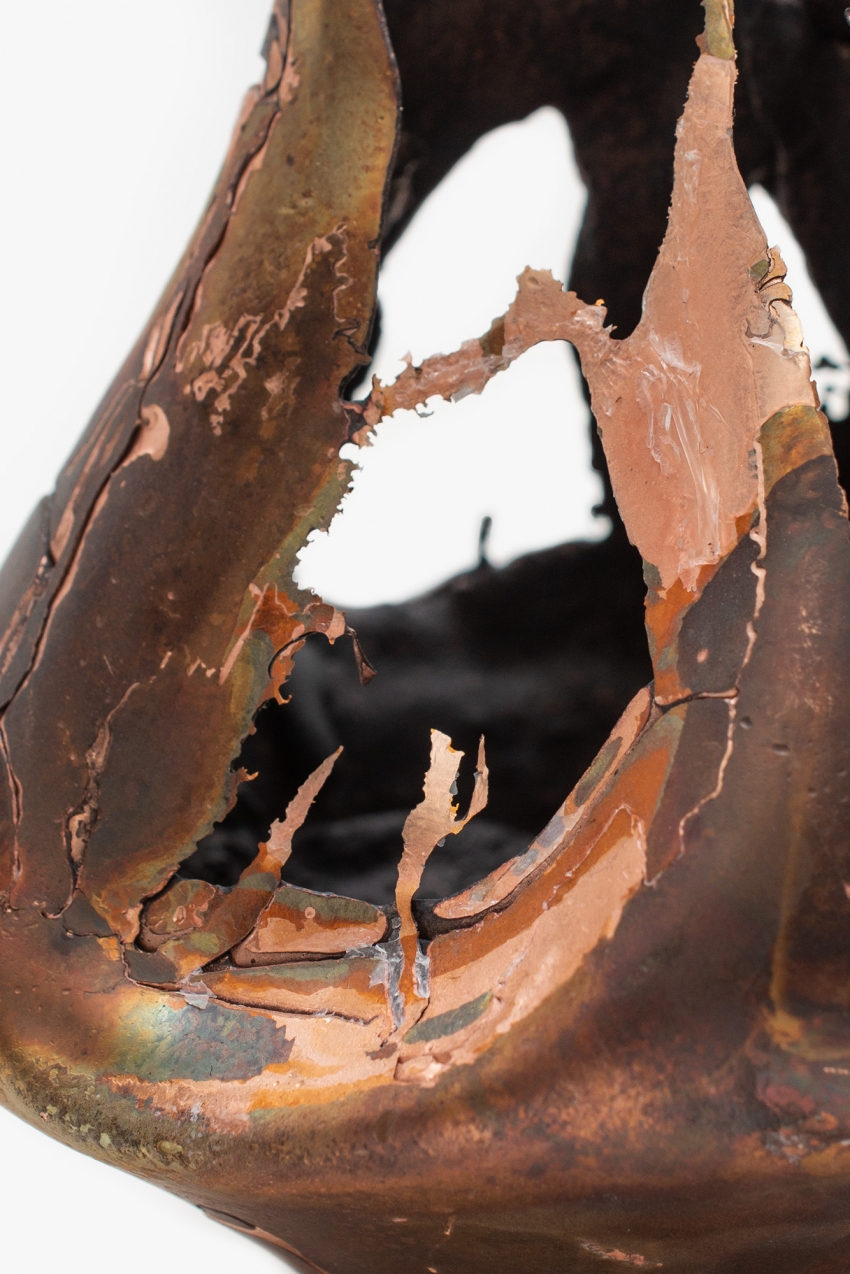