The photographic series Urban Secret Garden - a reading is an exhibit of the history of Thessaloniki and began as an improvisation in 2009, during purposeless morning walks around the city.

The series consists of contemporary photographs (2010 - 2014) depicting the urban landscape of Thessaloniki, but also older ones from the photographer's family archive (1950 - 2008): old and new images, articulated upon the steps of long walks taken place from winter to summer and from late at night until dawn. The modern-day photos capture the historic center of the city and the Upper Town/Ano Poli, the harbour, Ladadika neighbourhood, and the coastal route on an eastward direction towards Kodra military camp and Karaburnaki area up to Florida Shopping Mall and Macedonia Airport.

Family snapshots date from 1950 to 1990. The father, mother and grandmother of the artist are depicted in the garden, in front of the window of the Upper Town house, on the terrace or in the sampling hall of the prêt-à-porter small industry run by the family.
In an interview in Lifo newspaper, the photographer mentions: "Walking through the city one day, I realized that I was “seeing” all that was no longer there: the Dodoni bougatsa pastry shop on this corner, Niko’s carpentry shop a little further down, the Plus Size Fashion shop on the corner of Iktinou and Pavlou Mela Streets, the Studio 54 Disco, and the cool ice-cream shop named “The Beauty” where I used to hang out as a teenager… Upon completion of the shootings for the photography project, I was searching for a narrative. A personal incidence led me to the large black boxes where I keep family pictures. I have an obsession with family photo albums, boxes, dossiers or folders, where images representing life that passes by are stored; family snapshots forgotten in drawers along with old receipts, the stub of a pencil that doesn’t write, an eraser that doesn’t erase...”.

Photographs of the exhibition are also included in Nalbantidou's photobook Urban Secret Garden: a trilogy book of photographs. Flipping through the book for the first time, readers encounter the contemporary photographs, yet with a second reading, they are asked to cut open the hidden pages, in order to discover the old family photographs.

“There are threads in the book” continues the photographer. “Red, green and yellow: a different color for each of the book’s chapters: “Why the night”, “Mediterranean Air” and “Ano Poli Suite”. The threads signal the hidden archival photos that the reader is called upon to discover... I came up with colored threads and family photo archives almost the same way that past images and flavors are drawn to our consciousness. That is where I observe the seams joining the pieces into one unified piece of clothing that contains us. The colored DMC threads, the French white linen, the embroidery on the cover, the floral motifs of the contemporary photographs, all refer to the family business of ready-to-wear women’s clothing, which eventually closed in the late 1990s. In my book, handmade items converse with mass-produced ones".

The exhibition was designed in collaboration with architect
Irini Sapka.

The exhibition is a co-production with the National Bank of Greece Culural Foundation (www.miet.gr) and was presented for the first time in the Spring of 2019 at the MIET Cultural Center in Thessaloniki. 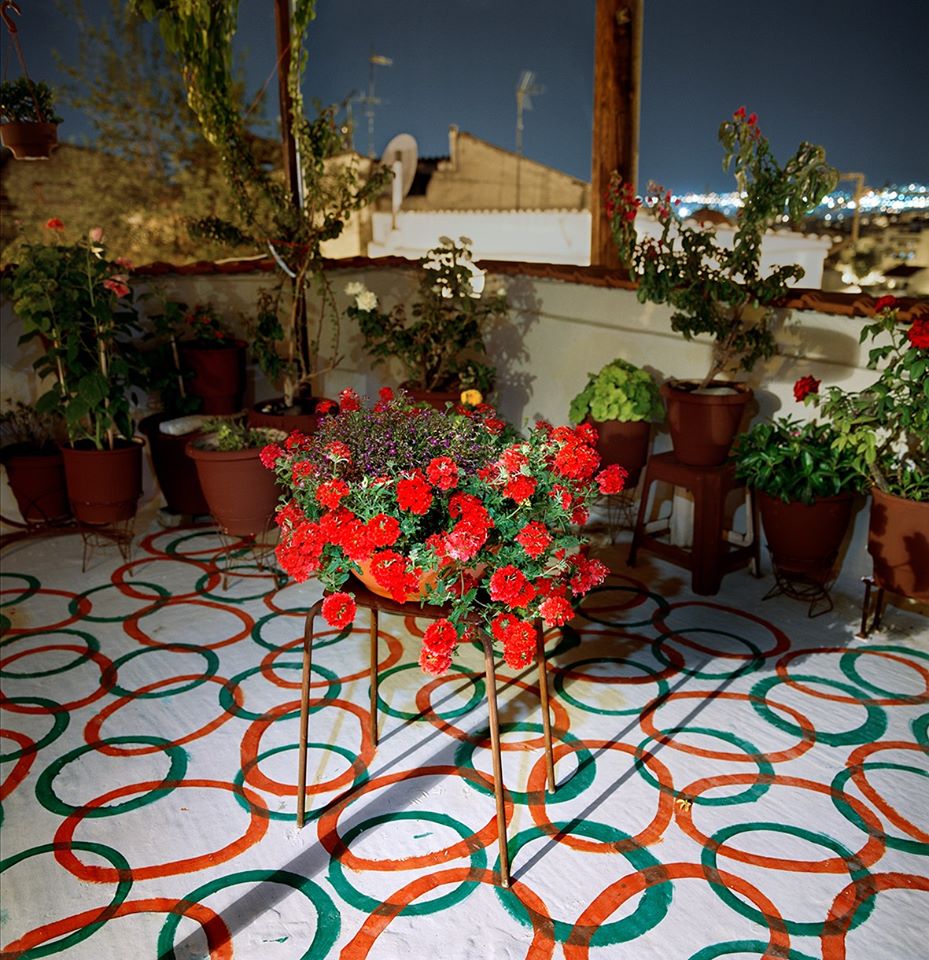