Jonas Dahlberg’s solo exhibition (Of) Public Interest is the first in a series of exhibitions at our new space TAVROS.

Jonas Dahlberg (1970, Borås) lives and works in Stockholm. His work lies at the juncture of architecture, set design, photography and film. More recently, Memory Wound (2013) the memorial he designed to commemorate the victims of the 2011 terrorist attack in Utøya in Norway was much discussed, coming under close scrutiny.

In Notes on a Memorial (2018) Dahlberg records with seemingly emotional detachment the trajectory of his close relationship to the events of the 22nd of July 2011, starting with the open call the Norwegian state made for a public memorial. Dahlberg’s winning Memory Wound proposed a cut in the Sørbråten peninsula which looks out towards Utøya, a permanent rupture, a reminder of the finality of the victims’ loss.

During the 27:55 minutes that the film unravels, we follow the minutiae of a sequence of events – the terrorist attack, the design process leading to the proposal, the selection of Dahlberg’s proposal Memory Wound, the media noise and ensuing public reaction culminating in the cancellation of the memorial in parallel with a more personal loss, that of Dahlberg’s very own father. Notes on a Memorial is a dense journey in time, a dark narrative born of trauma, mourning, memories and what comes next.

The primary material of the film is an endless landscape of information constructed exclusively out of digital imagery and data, using different software, satellite views and statistics. In contrast to the “Scandinavian noir” chiaroscuro qualities that was typical of previous films with their silent heat and empty sets and scenes: darkness now can be found in real life. A thin red line flows likes blood in the diagrams, the heart beat perhaps of this storyline. Dahlberg does not step back, instead his own voice narrates his personal experience of events imbued with his faith that public sites where memories can hold are essential to overcoming trauma. The film is deeply personal and yet, the main protagonist is an all-encompassing landscape: internal, external, digital, political and ultimately physical. It’s a quiet voyage of our mind’s eye with no clear-cut absolution.

View Through a Park (2009) seems at first intensely cinematic. Using traditional narrative tools our gaze follows the constant flow of the camera in and out of private and public space. In flux, inwards and outwards void of life. The city portrayed is disturbingly empty, a vacuum of a home. Who has the right to enter the locked “public”park? To whom does this space belong and where has everybody gone? Without hints or explanations we are lead once again into a darker internalized place where an eerie feeling resounds, suggestive of something abnormal lurking in the absoluteness of the film’s silence.

In Dahlberg’s work landscape is a constant. Now, this gaze is transported right here to our own context, opening up to other potential mediations and narratives. Both works exhibited raise questions which lie at the core of our new space TAVROS and locus athens’ curatorial approach: the variable shifts and turns of public speech, the dividing lines between public and private space, the construction or the erasure of memories, art in public space and the multiple turns of language, place and identity.

Using Dahlberg’s works as a spring board for discussions, locus athens is therefore co-organizing with inside story a parallel program of talks in our space TAVROS. 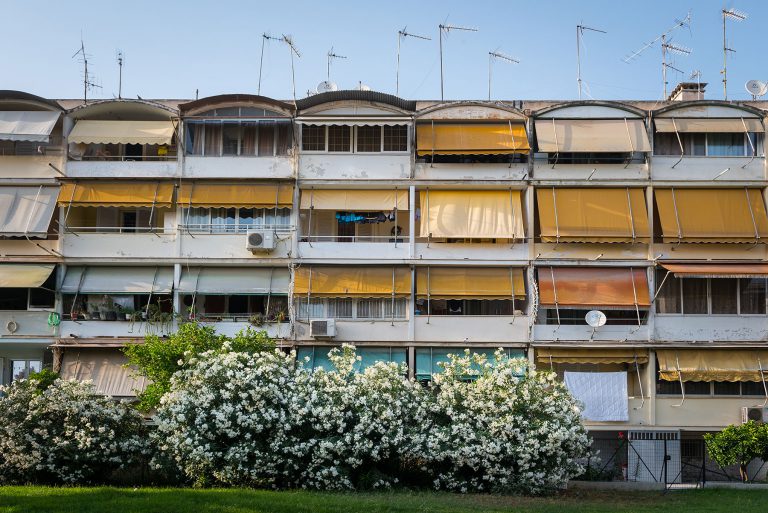