"Many friends think they are paying me a compliment by saying that I am one of the best greek female painters. Others on the other hand say that I am the most witty painter of all and I know they mean the wittiest female painter because, from all the painters together, it is generally known that the wittiest is Tsarouchis. I would rather if they saw us all together, men and women, even if I was not considered one of the best, but just good and even if I was not considered the wittiest, but just witty. I am against women’s clubs for the same reason. I have never heard of a club for men chemists or of a club of men artists. So, when Boulgoura asked me if I wanted to join the club of greek women artists, I replied with some pretentious amazement: “But I have nothing against men!" And we both laughed."
C.D. 1978

That was Celia Daskopoulou (1936-2006). 18 years after her last retrospective in Nees Morfes gallery, CAN gallery focuses on her outstanding work and in conjunction with the Athens Biennale ANTI (where 18 more works of hers are being shown) is paying a tribute to this bold and groundbreaking painter, aiming at a re-appreciation of her work. "As a woman who paints women, boldly, timely and lonely" this homage to Celia presents two more female artists whose work is preoccupied with human nature and especially that of women: Varvara Liakounakou (b.1978) from Greece and Augusta Atla van Fogh (b.1979) from Denmark.

Celia Daskopoulou studied painting at the Athens School of Fine Art on a greek state scholarship under Yannis Moralis, she graduated with distinction in 1960 and then left for Paris in order to pursue free studies in painting. In her first solo show in 1962 in Nees Morfes gallery her subjects were landscapes, mainly house facades, with extremely vivid colors in an expressionist style. When she returned to Greece from Paris in 1970, her painting had shifted dramatically and had become anthropocentric with an emphasis on female figures which are presented as portraits, reflecting either their conventional social roles or their emotional state. Daskopoulou's image is gradually shaped and the facial expressions are overstated, thanks to a deliberately crude and anti-naturalist mask-like style. She often uses ironic titles in her works such as Baby Girl, Shy Woman Looking Down, Sex Pussies, The Rivals, etc.

“I was making fun of women that wore make up and took too much care of themselves" she will characteristically say in 1982. "These works had a feminist style but at the same time they were comical." [...] "I started painting these female portraits without having a fixed idea of ​​what I wanted to portray. It was something that came out of my subconscious.” “The woman that is beautiful, not the one who is beautiful by nature, but the woman as society formed her in order to assume the role of the beautiful gender: Full of make-up, dressed, perfumed, with false eyelashes, wigs, etc., sexual, sweet, fatal, inaccessible. The woman who is hungry, suffers, pretends, undergoes painful surgeries in order to be desired. And I know it all too well, cause I tried desperately since the age of twenty and until about I was thirty-five to get into this mold that they have brainwashed us with. Since I was a young child I was envious of the pretty little girls because I realized that they were treated specially” Daskopoulou says in another interview in Pantheon magazine in 1978.

A few years later her work will take another unexpected turn. Her works depicting women with the unnatural mask of beauty that the male-dominated society has enforced through the various role-models are replaced by a series of increasingly dark portraits, that have a dramatic undertone and express her mood as a result of her personal experiences and her mental fluctuations. Until the end of her life in 2006 she had produced over 100 such portraits. Works organized in an atmosphere between cult and decadence, portraits that look as Nikos Karouzos called them like “still lives" make Celia Daskopoulou one of the leading painters of "psychogenic vertigo". This heartbreaking sincerity is extremely rare in painting. A look both tough and full of compassion. Her works according to Beatrice Spiliades "remain engraved in your soul forever. And something more: They scrape any enveloped or inherited resistance there in you and leave you exposed, forced to be honest as she is.” Her career progressed at a low profile. She did not present many solo exhibitions and participated only in selected group ones. Public and critics appreciated her work, establishing her as one of the most authentic female presences of Greek painting. In 2000, a retrospective exhibition of her work was held at Nees Morfes Gallery. 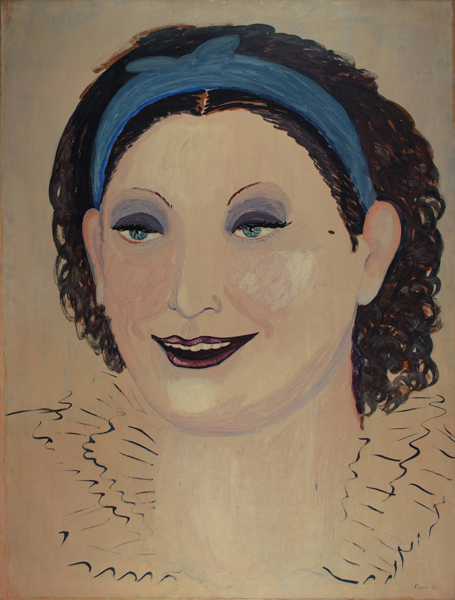