NEON invites you to the opening of the exhibition PROSAIC ORIGINS by Andreas Lolis, on Wednesday 12 September 2018 at 7pm, in the British School at Athens garden, curated by Nayia Yiakoumaki, as part of NEON’s CITY PROJECT 2018.

Andreas Lolis is a sculptor who works with marble, one of the noblest materials in the history of art. Cardboard boxes, ladders and planks of wood become marble effigies of precarious, transitory and unnoticed original objects. Through this traditional method, he elevates the everyday world of abandoned partial objects, makeshift constructions and ordinary things to the status of statues.

The British School at Athens opens its garden to the general public. Established in 1886, as part of a wider political and cultural movement that used as its foundation the model of ‘foreign’ educational institutions originating in developed western countries, the BSA offered a base in Greece for people to study all aspects of Hellenic culture, ancient, medieval and modern.

For this historic setting, Lolis has created sculptures that collide with the western idealisation of Classical Greek heritage installed in such a way as if they had always been there, abandoned objects, disrupting previously bucolic appreciations of the urban garden and the harmonious equilibrium of the School’s classical architecture.

CITY PROJECT is an initiative for public art and the city, conceived and commissioned annually by NEON to a Greek artist. NEON aims to activate public and historical places through contemporary art, contributing to the interaction of art, society and the city. NEON has previously presented exhibitions by Kostis Velonis at 11 Kaplanon Street (2017), Zafos Xagoraris (2016), Maria Loizidou at the Kerameikos Archaeological Site and Museum (2015) and Aemilia Papaphilippou at the Ancient Agora of Athens (2014). 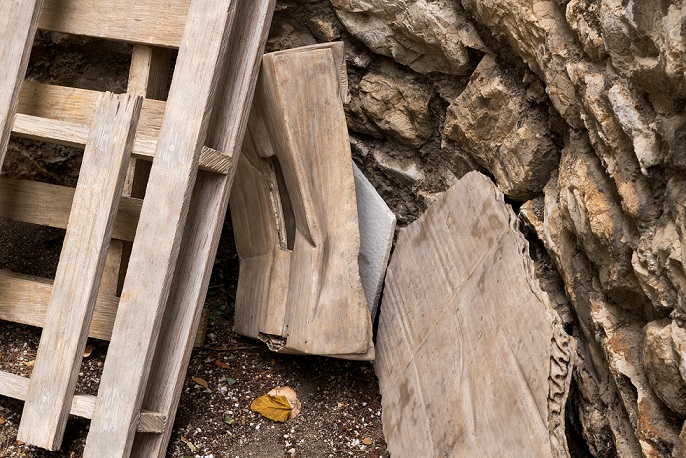