We traverse the landscape caught in-between states. From a point of departure to a delineated or yet unknown destination we find ourselves always in transition. Every step we take is a threshold of becoming, a never-ending return to the state we were in before and an arrival to a new state that is about to emerge. Neither inside nor outside we start grasping the world around us by passing through, by moving from one space to another.

The exhibition “Betwixt and Between” explores those liminal moments of being through a collaborative work by Antonis Theodoridis and Nikolas Ventourakis that takes the form of a photographic installation on the terrace of the B & M Theocharakis Foundation for The Fine Arts and Music building. First introduced by anthropologist Arnold van Gennep in the beginning of the 20th century and then rediscovered by Victor Turner in the 1960s –from whom we borrow the term that serves as the title of the show– the concept of liminality is used to define the intermediary stage in any ritual passage or in any radical situation that marks a transition within society and which comes to constitute it anew. Where social structures cease to be and fixed positions become disarranged the liminal period is one of uncertainty and simultaneously one of potentiality. In times of confinement and of social and physical distancing we are invited to reconsider those liminal spaces and times where what is real has yet to be imagined.

Between darkness and light, the works presented in this exhibition point to that direction. Taking as a starting point the city of Athens with its natural and built environments in constant negotiation Theodoridis and Ventourakis guide us through what resists being at the center, capturing and evoking what we do not expect to see or what lies in between. The exhibition space turns into a waiting space, a liminal space itself, where the boundaries between what is natural and constructed seem to get dissolved.

The ways cities are arranged reveal the social structures that formulate our human experience at the same time that our experience sets the very conditions for social actions that would allow for new structures to emerge. Located in the very center of the city, the National Garden of Athens serves as a landmark and a starting point for this rite of passage. Designed by the architect François Louis Bareaud in the mid 1800s under the careful guidance of Queen Amalia and in the principles of the English Garden, that represents an idealized view of nature, the National Garden constitutes the first organized ornamented green space of the modern Greek state. A natural yet highly constructed space for contemplation and seclusion inside the city’s chaotic realm the Garden becomes a silent frontier as well as a space between, that calls for endless crossings. Captured in long exposure photographs taken during night hours, a lush landscape of tranquility, where one can choose to remain lost, comes into contrast with the intensity of the surrounding city that seems to have remained intact. The antithesis between the natural and manmade gets intensified through another lens that depicts the city not as an organized whole, but rather as a composition that defies any strict order. Out-of-ordinary moments seem to interrupt our everyday practices and invite us to look at the city otherwise. Nature takes over in subtle or sometimes profound ways and thus becomes a new layer that weaves into the cultural and ideological narrative of the places we traverse and inhabit. Accompanying the photographs and audio installation comprising a series of recordings gathered in the Garden completes the setting by revealing the parallel lives of the place during the unsettling silence of the night. Between a fixed structure and a complete disarray, we find ourselves again on the limit, in an inter-structural position that separates us from any predetermined structure and which prepares us for the appearance of a new one.

On the very top of the B & M Theocharakis Foundation building with the direct view to the National Garden and to the symbolic and physical center of the city of Athens, we find ourselves on a liminal point, in and out of time, neither here nor there, yet both “betwixt and between”, immersing ourselves into an otherworldly state where the internal and the external alternate infinitely.

Antonis Theodoridis is an Athens-based artist, working in the medium of Photography. He is a Fulbright Foundation and Stavros Niarchos Foundation fellow, holding a Photography MFA degree from the University of Hartford, Connecticut. His practice is a mixture of traditional analogue photography along with digital processes, research, collage, and printing. Using a variety of cameras and mediums he depicts places and people, producing sharp in detail and rich in color pigment prints and installations. Following a road-trip along the Western States in 2014, his work Newspaper from the American West was published in Greece by Agra Publications. Since 2016 he works and photographs within the city of Athens leading to his series Ways of Escape, exhibited at the Benaki Museum during Athens Photo Festival 2017. Through his work he examines how photographs and image culture in general, shape western perception, emphasizing the notions of cultural bias within our limits of historical memory and knowledge. His process aims to reinvent context and meaning through documentary, collage strategies, print-making, and installation. His work has been presented in Greece and abroad. It can be found in the collections of the European Investment Bank Institute, the Thessaloniki Museum of Photography, the Municipal Gallery of Thessaloniki, as well as private collections.

Myrto Katsimicha (b. 1991, Athens) is a curator and cultural worker based in Athens, Greece. She holds a BA in Media, Communication and Culture from Panteion University of Social and Political Sciences, Athens (2012) and a MA in Curating the Contemporary from London Metropolitan University and the Whitechapel Gallery, London (2014). Her research interest lies within independent forms of organizing in the arts and alternative educational models. In 2017-18, she was the 12-month intern in the Adult & Academic Programs, Education Department at the Museum of Modern Art in New York, where she organized and moderated the public program From Mexico City to New York: A conversation with Tamara Ibarra and Rachel Valinsky on collaborative practices and the links between independent art practices and contemporary art institutions (MoMA, September 5, 2018). Past curated projects: Unlikely Outcomes: An Improvision, Void, Athens (2020); DELIVERART, a moving experience in the center of Athens (2019); 10.000 Steps—Thodoris Pistiolas, Vorres Museum, Athens (2019); If I cannot bend, I will move, Snehta Residency, Athens (2019); Going where we come from, a performative walk in the neighborhood of Kypseli conceived by artist Maëlle Gross and co-curated with Olivia Fahmy, Αthens (2017); Things are left to become concrete, Snehta Residency, Αthens (2016); Of other places, a series of film screenings at State of Concept, Αthens (2015) and EXOTICA and 4 other cases of the self, co-curated with Fanny Nina Borel and Elisabetta Rabajoli at me Collectors room, Berlin (2014). In the past she has worked for art institutions in Greece and abroad such as documenta 14 (Athens & Kassel), State of Concept Athens, the Athens Biennale, and Phenomenon Anafi, among others. She is currently working at Onassis AiR, international artistic research residency program in Athens.

Nikolas Ventourakis is a visual artist living and working between Athens and London. His practice situates in the threshold between art and document, in the attempt to interrogate the status of the photographic image. A quest that unfolds in the decisive years of the digital revolution, when a crucial overlap between producers and viewers seems to have reset all previous critical discourses. Central to Ventourakis’s visual work is a denial for a one-way resolution and an invitation to embrace an ambiguous imagery, where the photographic is not yet real, and the familiar is a projection of a mix of memory –stemming from both private and media experiences– with abstract thinking. Ventourakis’s fascination lies in our need for stories to be conclusive, which cannot but clash with the impossibility for apparent pictures to provide any evidence nor “objective truth”. This is why his work allows for bias and misinterpretation. Whatever the context –a gallery, a page or the screen of a computer– his photographic images seem to have no unanimous foundation and every viewer is left alone to fill in the missing blanks. Ventourakis completed an MA in Fine Art (Photography) with Merit at Central Saint Martins–University of the Arts London (2013) and is the recipient of the Deutsche Bank Award in Photography (2013). He was selected for Future Map (2013), Catlin Guide (2014) and Fresh Faced Wild Eyed (2014) at The Photographers’ Gallery as one of the top graduating artists in the UK. In 2015 he was a visiting artist at CalArts with a Fulbright Artist Fellowship and is a fellow of New Museum’s IdeasCity. He was shortlisted for the MAC International and the Bar-Tur Award. Recently he has exhibited at FORMAT Festival, Derby; the NRW-Forum, Düsseldorf; the Mediterranea 18 Young Artists Biennale, Tirana; the parallel program of the 15th Istanbul Biennale, Istanbul; “Hors Pistes 14” at Centre Pompidou, Paris; and “The Same River Twice” at the Benaki Museum, Athens. Since 2017 he is the artistic director of the Lucy Art Residency in Kavala and is co-curator of the project “A Hollow Place” in Athens. In 2020 he was awarded the Stavros Niarchos Foundation Artist Fellowship by ARTWORKS. 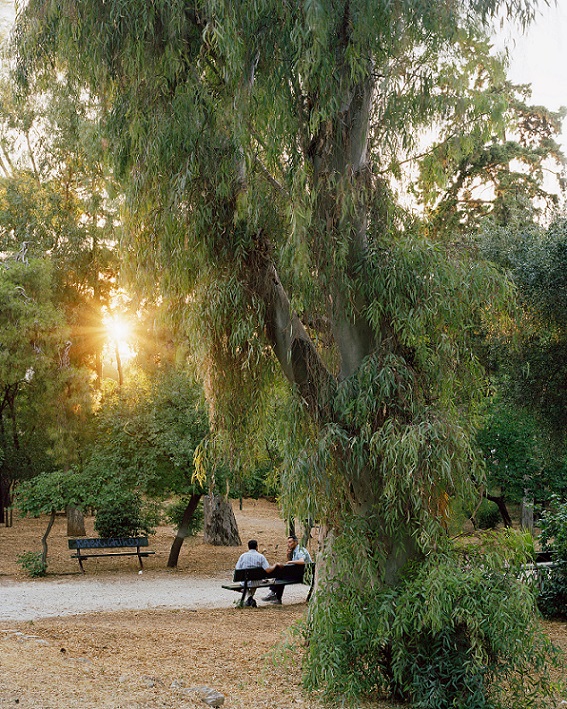 Nikolas Ventourakis, XXIX.There are so many ways to look at it, from the series “Unlikely Outcomes”, 2021. Courtesy of the artist