What happens though in the in-between of these (photographic) edges that look like time and space –provocatively- at a standstill? The never stopping in-between movement of the pendulum, at times violent and at tomes gentle, is loudly absent in the depiction presented here. Perhaps it is because the photographic representation is mainly selective, it opts to hide in order to show.

The Pendulum book is the approach of a return journey to the city of L’Aquila in central Italy. My relationship with this place started 12 years before I was born, when my parents met each other accidentaly there. I grew up listening to their narrations about this city, I visited it with them as a child, and I molded their story in my mind. I moved there, only a few years after the earthquake, in order to work as an architect in the reconstruction of the city, but in reality it was a return to my fictitious roots. During my stay, I experienced the post-seismic terrain in a very bizarre way. The sense of fa- miliarity I had developed in my fainted childhood memory collided with the uncanny new condition the city was in. The natural disaster caused a violent change at the body and the life of this place and led to the displacement of its citizens towards the suburbs. The heart of the historical center, where I lived, was left empty and a strange silence prevailed in the narrow streets. L’Aquila was a pass-through in a transitional period of my life, a temporary pause in a place that reminded a nonplace. I experienced this pause as an oscillation in the air. The quake’s resonance created a rupture in my mind. I tried to heal this rupture by capturing photographically its imprints and its aftermath, as a process of re-writing this place in my memory, as a personal quest to restore a relationship. However, I left L’Aquila before its reconstruction was completed. The pendulum’s movement was interrupted, the oscillation stopped; it stayed unfinished.

Stefania Orfanidou was born in 1989. She is an architect and a photographer currently living and working in Athens, Greece. She has lived in Kavala, Thessaloniki, Madrid, Rotterdam and L’Aquila. Since January 2019 she is co-founder of the multidisciplinary studio CHORA – Creative Hub of Radical Architecture. Her photographic work has been featured in magazines, galleries and festivals in Greece and abroad. 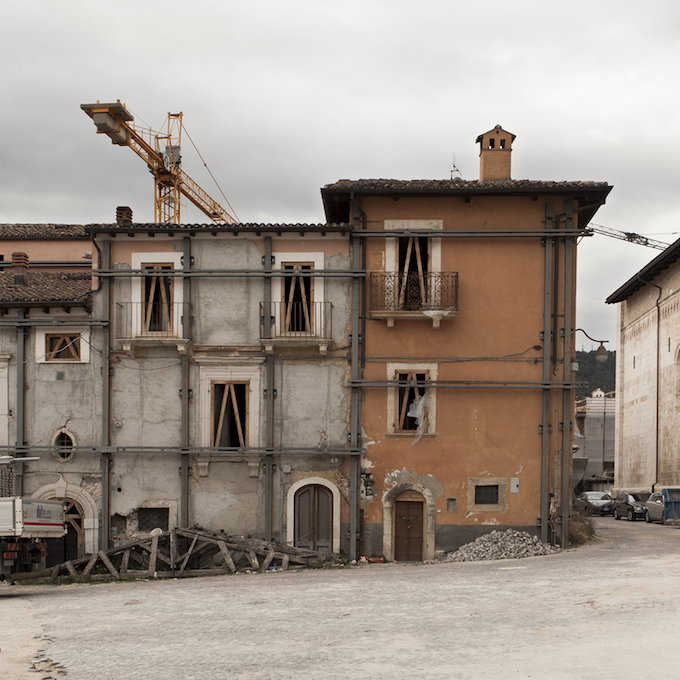